On the morning of April 27, 2019, we were at the Pasteur University Hospital in Nice (France) to attend several conferences during the 1st national meeting of underwater activities of the FFESSM. This first half-day was devoted to diving safety and accident prevention methods in our practices, here is a short text to share with you what we heard.

After an introduction by the Mayor of Villefranche sur mer, it was Mr Jean Louis BLANCHARD, President of the French Diving Federation, who reminded us of the interest of this day, which was more focused on the general public than the very scientific one in Toulon. This day, we have heard about safety and well-being.

The position of an explorer

To begin with, Alban MICHON, a modern-day explorer loved by all, spoke of his vision of security. He wanted to come to answer the reflections often heard “but it’s dangerous what you do, why you do that?”. Ice diving, underground diving, Arctic expedition, how does he approach all this? Alban told us that it was through the approach of underground diving that he learned to save himself rather than the other and by continuing under icy ceilings that he continued to progress. The man the polar bear probably didn’t want to eat because his big heart beats so hard for his world told us that before he leaves, he does drills and records a whole bunch of answers to possible problems (medical for example, as when he had the cornea frozen last year in his adventure). It is this logic of risk management, of adapting your equipment to the situation, of knowing how to say no, of not overestimating yourself and listening to what is going on in your head that keeps him alive.

“The accumulation of equipment can be a source of insecurity and have a false reassuring appearance: no need to go in 20l sorting to do 20min diving on the Donator wreck!” And he’s right…

For Alban to be an explorer is a profession, there’s training, it’s not something to be improvised because it’s not just about making images or books, it’s also about being a conqueror of the useful, going where scientists can’t go. The public now knows some of the motivations that motivate him and that he presents so well in his latest book “L’itinéraire d’un nomade des glaces” that I had great pleasure reading recently and do not fail to recommend you. 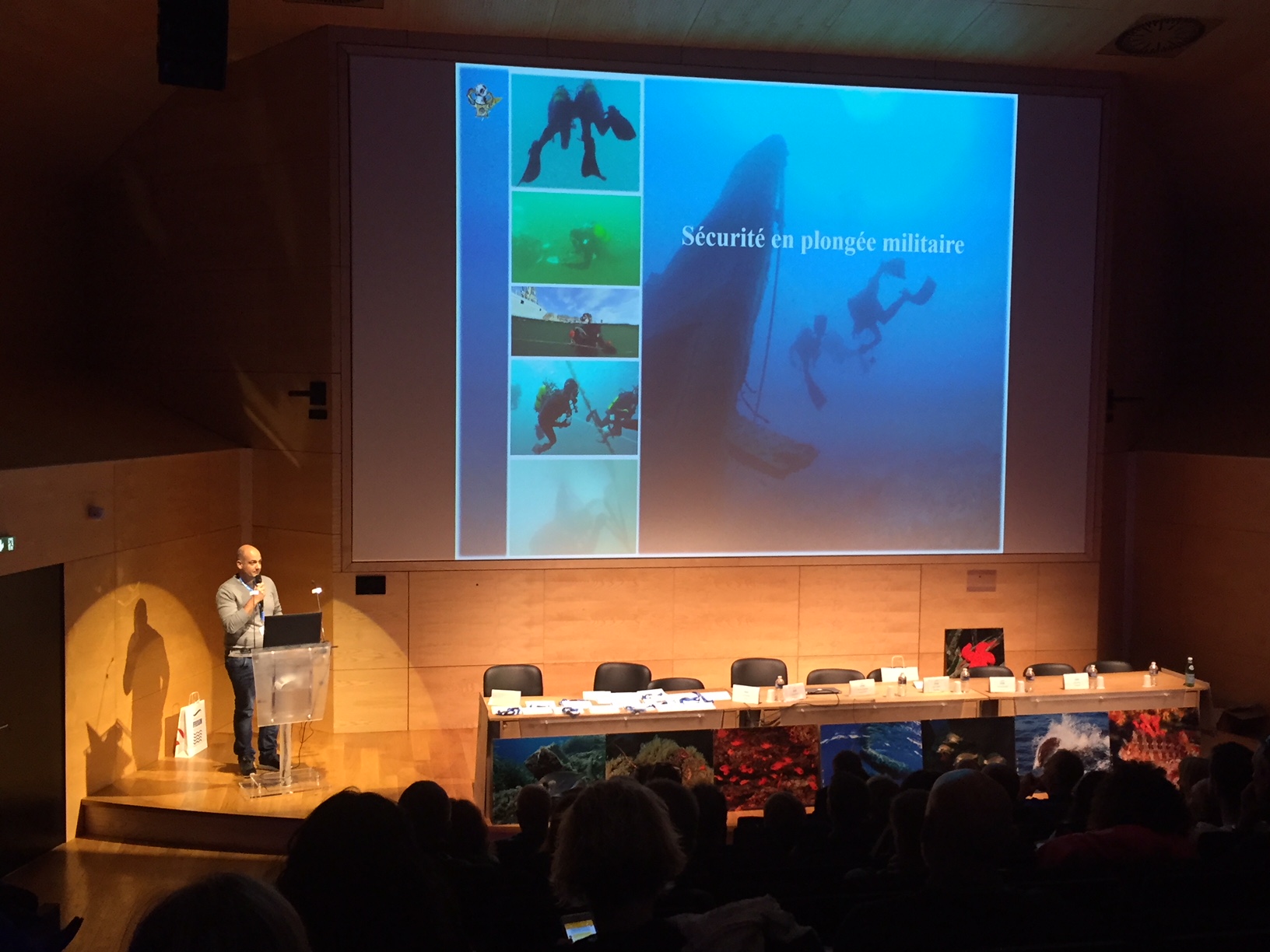 It is in a continuum on extreme diving that Nicolas FEBVAY known by the beautiful videos of diving in Var that he regularly shares, naval officer and scuba diving instructor, presented the safety in military diving. In charge of the CEPHISMER mixing cell and the hyperbaric test centre, he presented the three types of military divers: on-board diver (initial training), deminer diver and combat swimmer (specialties). There are 2276 divers in the navy with an average age of 35 years otherwise military divers are divided as follows: 221 in the gendarmerie, 227 army, 50 air force and 46 army health services. All applicants are selected at the entrance to have a homogeneous sample so that they can become professional divers in 6 weeks. The initial training is focused on diving technique, theory and also on interpersonal skills, which are assessed weekly. Nicolas explained that to train them they have a lot of instructors, on average on all courses 1 for 2 students. They use nitrox to supervise and have immediate medical support from the army health service. After being certified, the validity of skills and abilities (physical and medical) is checked very regularly with audits of the units. The on-board diver is limited to 35m without decompression.

All these precautions allow to drastically limit the number of accidents with only one ADD (decompression accident) on average every 45,000 military dives.

Dr. A. KAUERT of the hyperbaric medicine department followed up by saying that we have 1 ADD per 10,000 civilian dives. The peak of accidents in Nice began a very long time ago in May. The biggest problems come from decompression recovery dives and cases of poor monitoring of victim management protocols. Also be careful to slowly back up 6m to the surface, we saw computer curves with a surface return in less than 15 seconds! Beware of uncontrolled landings, descents to 15m after having made its landings to 6m…. These profiles are accidentogenic and the intervener recommends that we make safety stops even if the computer does not give any stops, and also that we do not make a reverse profile. Even if the sanction may not appear on “bad profiles” and conversely, profiles with attractive curves are observed among accident victims, it is necessary to know how to increase their safety margins. The doctor reminded us that the diving accident is a therapeutic emergency, it is absolutely necessary to call the emergency room as for a myocardial infarction or a stroke. Do not hesitate to disturb the professionals who are there for that, quite the contrary, they will be happy to let you go quickly if you have nothing. 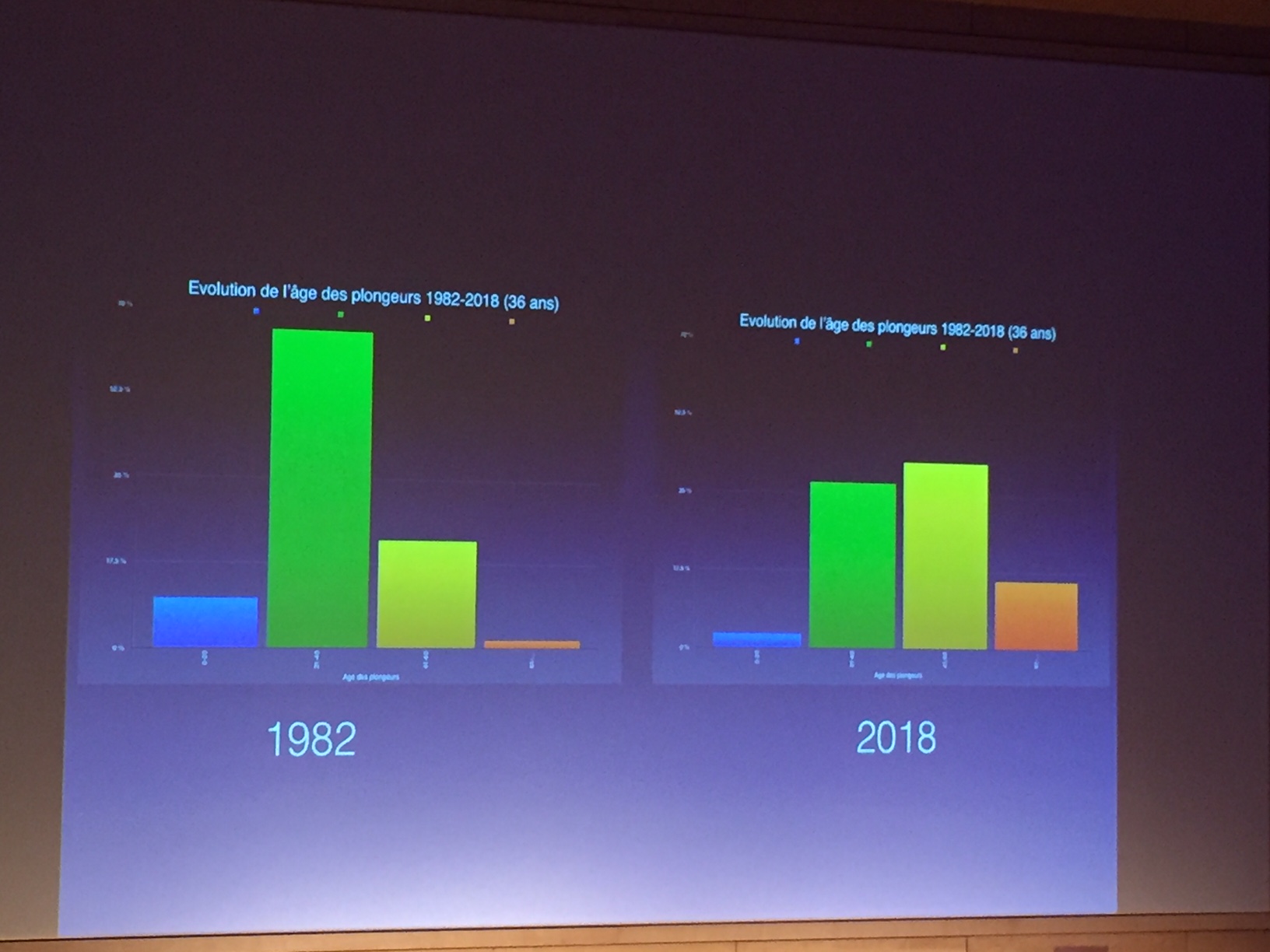 In 1982 the average age of the diver population in France was 35 years old, today it is higher (there is a real seniorisation of the activity) so it is necessary to be careful even if the number of diving accidents received annually in Nice between 1997 and 2018 is relatively stable (40 + or – 15) while the number of dives has been quintupled. In conclusion, it is necessary to gradually resume diving, adapt your diving profiles to your physiology and consult your doctor well, especially as you get older.

Mr Richard VIAL of the CIP Nice and his team dealt with the problem of the diver’s physical and psychological state during his reception in the structure. What we master: the examination of divers’ papers and a questionaire. With this an idea of the person’s profile is possible. But there is what we can’t control: his psychological state, his fatigue at that moment, if he practices sports next to the rest of the year, his medical history, his habits in terms of alcohol, tobacco or various drugs, the real level in the water despite the certifications, and another factor the diver’s denial… So for your safety, don’t lie to yourself, as said above, you must know not to go there. It is necessary to think about safety above all in diving, it was also presented the O’dive Azoth  system tool that we talked about a year ago. The diver must remain objective about his condition. For a little more lightness in his speech, he then shared with us a wonderful moment spent underwater that we let you discover: a fabulous encounter with a grey dolphin on our Mediterranean coasts.

Following this, the staff and members of the French apnea teams gave us a feedback on the safety of apneas in constant weight. With an impressive video presentation of Thomas BOUCHARD’s 70m descent equipped with a lanyard connected to the competition cable, we could see that the ascent is secured by a first safety diver joining him between 30 and 15m on an underwater scooter (DPV) and then two others who come in the 7-8m zone to accompany him to the surface. No scuba diver makes safety because it is not necessarily appropriate to intervene in case of a problem if you dive deep in a diving suit. The preparation of the stem with a counterweight secures the athlete in the deep zone and throws him back to the surface in case of a problem. Otherwise, they use an electric winch with a live video feedback integrated in the cable (Orkotec system). They use ascent rates, depth, total reported time and video feedback to monitor the competitor’s behaviour and detect any abnormal signs used to decide whether or not to rescue. Interesting protocols for a diving activity as specific as those discussed above.

“In scuba diving as in snorkeling we play Russian roulette, the challenge is to increase the number of balls that can be in the barrel” Thomas BOUCHARD

Dr Carl WILLEM then insisted on the importance of ensuring his medical condition, to submit to the controls and to know how to give up in order to avoid dramas. In apnea it is not necessary to dive alone in order to have the possibility to be assisted in case of syncope occurring between 10m and the surface. Apnea accidents can occur even at relatively shallow depths, an example of a firefighter in good condition, a student, who went down to 20m and made an immersion edema (blood in the lungs) was presented to us. On this case there were worse than usual conditions and a night shift that could explain this… One thing to always keep in mind, there is no such thing as a small dive! To go down in apnea and even in scuba diving it is good to work on your thoracic flexibility. It is an effective factor in preventing oedema The psychological aspect is a factor not to be forgotten, it is what has been continuously hammered and that must never be stopped. It is important to tame the depth and not to go too fast too deep.

“Be patient and rest yourself before your dives.” During an exciting speech by Claude CHAPPUIS

The morning then ended with an optional visit to the local hyperbaric medicine department.